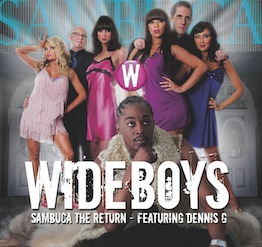 PROFILE
Singer and award-winning songwriter Shaznay Lewis fronted one of the hottest collaborations “Daddy O”, a slice of bassline and garage heaven from the ultimate Old School Garage Meisters Wideboys, which dominated the airwaves in the UK and U.S.

Platinum-selling producers and remixers the Wideboys (Edward Craig & Jim Sullivan) have been working together since 1996. At the time, Jim had his own recording studio and met Eddie working in his own record store. Their first breakthrough was with the Artful Dodger and Craig David with the classic “Woman Trouble” in the Summer of 2000. They subsequently won Best Newcomers at the 2000 UK Garage Awards. The guys are best known for their 2001 hit “Sambuca” featuring Dennis G and producing the Liberty X Top 5 debut “Thinking It Over.” The album, of the same name, went on to sell over one million copies worldwide. Wideboys hit the number 1 spot on the UK club charts with remixes of T2’s “Heartbroken” and Rihanna’s “Don’t Stop the Music.” The unstoppable duo have also sprinkled their magic over hits from Taio Cruz, Snoop Dogg, Sugababes, Britney Spears and David Jordan‘s single “Move On.”

Shaznay (who in 2001 won the Ivor Novello Award for Best Songwriting) proudly stands as one quarter of the phenomenally successful band All Saints. While the girls are busy cooking up new delights in the studio, Shaznay just couldn’t resist “Daddy O” all for herself.

“Daddy O” was written by Therese Grankvist alongside Thriller Jill (Ian Masterson and Terry Ronald). Therese reveals that the area, the street vibe, the chatter and ragga bars of Elephant and Castle in London were the heavy influences behind the song “Daddy O.”
AUDIO
VIDEO
NEXT PLATEAU
SITE MAP
CONNECT WITH NEXT PLATEAU
35 Worth Street, 4th Floor
New York, NY 10013
Map It
+1 212 243.6103 phone
+1 212 675.4441 fax
Home
Artists
Releases
Compilations
Publishing
About
Contact