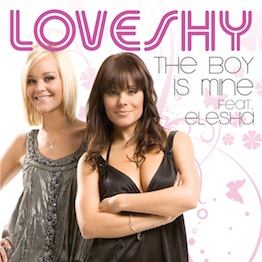 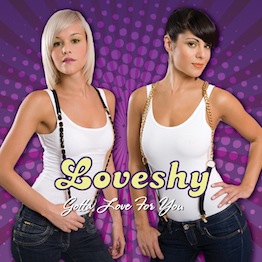 PROFILE
The hot new duo, LoveShy, may be young but they are already experienced music performers. The girls, Aimee Kearsley and Emma Beard, have already chalked up 5 years in the business being part of a successful UK girl band.

Aimee and Emma first hit the headlines after getting down to the final 10 girls in the hugely popular TV Show Popstars: The Rivals. The show went on to form Girls Aloud and 4 of the runner-up girls, Aimee, Emma, Lynsey Brown and, Chloe Staines formed girl band CLEA.

CLEA had 4 hit singles “Download It,” ‘”Stuck In The Middle,” “We Don’t Have To Take Our Clothes Off” and, “Lucky Like That.” All hits were taken from their debut album release “Trinity”. The band reduced to a three-piece in 2005 (Chloe Staines emigrated to Canada) and toured the world, achieving success across Asia and Europe. Lynsey Brown decided to leave the group at the end of 2006, and Aimee and Emma set about making plans for a new sound, look and band to continue their quest for success.

Those dreams materialized in 2009 with the launch of LoveShy and a new record deal with leading UK Dance label All Around The World/Universal (Cascada, Dannii Minogue). The label immediately signed the girl’s club track “AM to PM.” “AM to PM” was produced by the Wideboys (Rihanna, Shaznah Lewis) and remixed by hot UK mixers KKlass, Thomas Gold, Wideboys and was included in a bassline mix by Mr V. “AM to PM” reached No.1 on the M8 Club Charts, DJ Magazine Club Charts, DMC Club Charts, Music Week Pop Club Charts and No.2 on the Music Week Club Charts and is played across all dance shows.

America came calling with hot USA dance label Next Plateau Entertainment signing Loveshy’s single “Got A Love For You,” a cool house remake of the underground Jomanda classic again produced by the ubiquitous Wideboys. The girls followed up by remaking the Brandy and Monica classic “The Boy Is Mine” produced by Buzz Junkies, now available in new remixes.

With a debut album in the works, the girls are working with the best of Europe’s dance producers including the Wideboys, Buzz Junkies, Soul Seekerz, Ander May and Oscar G. Additional tracks include Power Of Music and You Don’t Know.